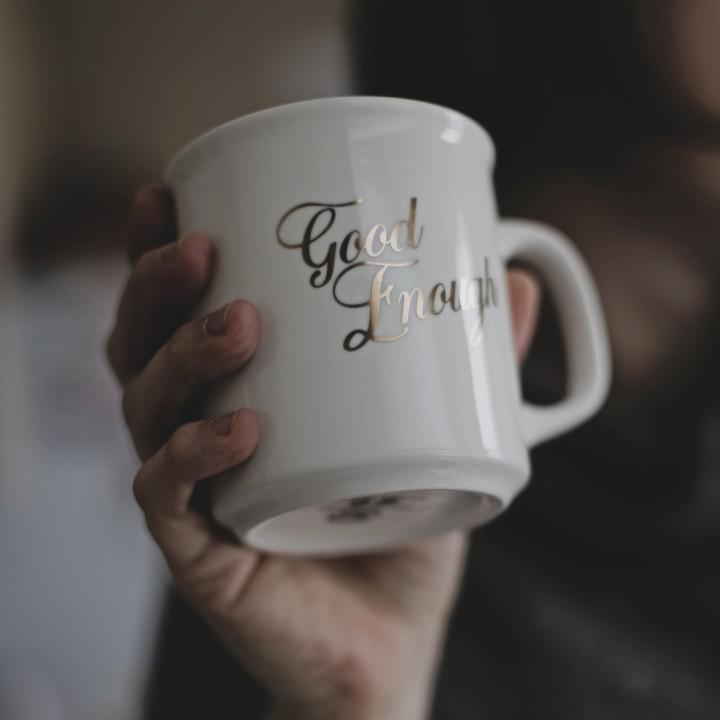 My perfectionism has had a tremendous impact on my life – a negative one. It has kept me from trying new things out. It has made me invest way too much time and effort to bring a result to perfection - resulting in me not having enough time for other, more important things. It has made me do everything on my own out of fear other people would not care to perform a task the way I would (this is probably a mixture of perfectionism and grandiosity and unrealistic expectations). As a logical consequence, I have been walking through most of my life with a constant feeling of dissatisfaction and exhaustion.

Perfectionistic behaviors have a significant negative impact on our performance, satisfaction, and mental health. They keep us from gathering important (and joyful) experiences in life, from learning and developing.

To set this clear – I am not talking about a healthy pursuit of high-quality work, which psychologists call adaptive perfectionism, qualified by a high level of diligence and conscientiousness. If you are passionate about giving your best and delivering high quality products and services – please do not stop. If you are constantly anxious about making mistakes and trying to avoid failures, a behavior called maladaptive perfectionism, read on, because we will be talking extensively about it – where it comes from, examples of how it manifests at the workplace and how to deal with it.

Maladaptive perfectionism, which I will simply call perfectionism for the rest of this article, means seeing the world through binary spectacles. If you show a perfectionist the 100 percent scale, they will see only 2 values: 0 or 100 percent. Everything in between is not desirable and/or acceptable. This basic world view impacts almost everything a perfectionist is doing. There are basically 3 ways how perfectionism shows up (feel free to read this as a test and tick the boxes – one is already enough).

1.     Perfectionists put an unreasonably high level of resources, time and effort into a task while striving for the 100 percent. Their work is characterized by a disproportion between input and output, between effort and result, and by a maldistribution of resources. In other words – it often is highly inefficient and too slow. This applies also to taking decisions. With a perfectionistic executive leading a unit or a whole organization it might lead to products entering the market too late or burning down too many resources too early in the product development process. I imagine the bulk of readers of business classics like “Lean startup” by Eric Ries or “The 80/20 Principle” by Richard Koch being at least a bit perfectionistic, as both books address exactly this issue of inefficiency and how to overcome it.

2.     Perfectionists in leadership roles become bottlenecks on the edge of exhaustion. They take on too many operation tasks out of fear or the belief, only they care and/or are able to deliver the perfect result they imagine in their mind. They fail to delegate tasks, only to find their plate more than full. Many times, I have worked with leaders who had enough tasks for 2 or even 3 plates and were struggling to give anything up. There are 2 main results of that behavior and they have both significant negative impacts on the productivity, efficiency, and creativity of an organization, fostering bad culture:

First, due to their struggle to delegate tasks, perfectionistic leaders often are forced to neglect their actual leadership role, as they bury themselves under operational work and the day only has so many hours. Being a good leader (I want to say - a Brené Brown kind of leader as laid out by her in her bestselling book Dare to Lead) includes among other things to enable, motivate, create a vision and a good environment for the people to unfold their potential and deliver good results, to foster a good culture and to keep the processes and strategy constantly up to date. This is not something to do in the last 5 minutes of a long working day.

A second behavior I have observed in perfectionistic leaders is leaning into hero mode and trying to do it all, with catastrophic results for their physical and mental health, exhaustion being their best friend. Typically, around such leaders you see dwindling levels of motivation, ownership and learning in their teams as the people learn to lean back and wait for the boss to step in and do it themselves. (If you feel reminded of a stressed-parent-under-time-pressure-won’t-let-child-tie-shoelaces-themselves-moment – it is basically the same mechanism.) Again, a dynamic of inefficiency evolves as the leader becomes the bottleneck slowing everything down, despite their best efforts.

3.     Perfectionists are reluctant to simply try things out or give up on new endeavors fast out of fear they can not master the activity perfectly fast enough (and will be judged by others for the fact). It is a protecting mechanism that prevents you against the projected possibility of failure. Great examples how this behavior can massively impact our lives is when a person (often female) decides not to apply for a job because she finds herself being able to tick only 9 out of 10 requirements and skills mentioned in the job ad. Or when a perfectionist waits endlessly before finally doing some specific thing because they do not feel well enough prepared.

Look around and you will probably find several people postponing taking the next step in their career, starting that business, writing that book or finally taking drums classes (yep, that was autobiographical) because of the fear of failing or not becoming a “pro” straight away. Perfectionists love to compare themselves with the best and most successful representatives of the respective endeavor – unfortunately without bothering to learn or care about the 1000 failed attempts that precede every success story. (Which is also supported by our culture concentrating only on the successes and neglecting the stories of failure behind them. A refreshing outlier is the podcast and book “How I built this” by journalist Guy Raz.)

Where perfectionism comes from and how to heal it: beliefs and needs

Our behavior is determined by the stories we tell ourselves about ourselves and the world as well as by universal human needs like the need for appreciation, control, fulfillment or as Jerry Colonna, author of the bestselling book “Reboot: Leadership and the Art of Growing up” and host of the podcast of the same name puts it - "The Big 3": Love, Safety and Belonging. Everything we do is in our pursuit of fulfilling our needs. The way we pursue them is determined by our beliefs and assumptions, which we have internalized during the course of our life, but mostly during childhood. If we operate on beliefs like “I’m not enough”, “I’m not good enough.”, “You only get love in exchange for performance and effort.” “I have to be better than everyone else.”, we experience life as one threatening situation after the other, in which we have to prove our worth by being perfect, otherwise we will not experience love, safety and belonging. Or there might be beliefs like “Conflicts are a threat.”, resulting in conflict-avoiding behavior. Doing everything by oneself and not delegating or asking for help is a wonderful way to avoid conflicts and tensions and to believe one has everything under control.

Ok, so I am a perfectionist, now what?

The first and most important step is to become aware of how exactly perfectionism is playing out in your life. We can only change what we see. Which of the previously described behaviors do you notice in yourself? Practice noticing in the very same moment your perfectionist comes out and takes place in the driver’s seat. Maybe you can give that part of you a name. How does it behave? Where in your history has that behavior been “programmed”? What emotions come up in the situation – fear, anger, disappointment, frustration?

Second, practice acceptance. Can you accept that right now you are behaving out of your perfectionistic mode? Can you accept the right now you have these unpleasant emotions and not try to get rid of them? That sound almost trivial, but it is a crucial step to shift to a new behavior. As long as we oppose our current state and get frustrated or angry with ourselves for “doing this stupid thing again” – for not being perfect – we are caught in the middle of the unhealthy mechanism. The way out is by accepting the moment and normalizing it.

Researcher and best-selling author Brenè Brown has a whole podcast on FFTs: Effing first times, where she shares her research on “how hard it is to be new at things – from small things to global pandemics. When we have no relevant experience or expertise, the vulnerability, uncertainty, and fear of these firsts can be overwhelming.” According to Brown, one can significantly lower the pressure and anxiety by reminding themselves that it is perfectly human and normal to be bad in the beginning. Similarly, the author Anne Lamott talks in her bestselling book Bird by Bird about “Shitty First Drafts”. Overall, humor is a great way to observe a situation with a little bit more distance and hold one’s own story lightly.

Third, readjust your goals and expectations. Suppose you have managed steps 1 and 2 and are now ready to shake your rigid binary expectations of what is good and acceptable (100 percent) and what not (everything else) a bit. A good way is to practice staying open and curious, e.g. by asking yourself wonder-questions: “I wonder what would happen, if…” That is the opposite of the closing down that happens when we stick to our stories and assumptions about ourselves, the others, and the situation.

Another good way is consciously adjusting one’s zone of what is acceptable. In other words – define your 100 and then go for 80. You have probably heard of the expression “Good enough is good enough.”, a phrase coined by British psychoanalyst Donald Winnicott when researching relationships between parents and children in the 1950s. After talking to parents who felt they were failures, he realized their unease stemmed from a particular place: excessive hope. He then developed the phrase “good enough”, explaining to participants that no child needs a perfect parent in order to be raised well. Instead, having a moderately healthy upbringing would do the job just fine. According to philosopher Allain de Botton as he explains in one of his videos on the topic, “good enough was invented as an escape from dangerous ideals.”

Fourth, be kind to yourself. Changing deeply rooted behaviors takes time, practice, and compassion. You will not be successful – a pro – right away. For new behaviors to sustain, new neuropathways must be created and strengthened in the brain, which happens through persistent practice – sticking to it despite drawbacks. This is something that perfectionists are not very good at, as we recall. For them, self-judgment comes a lot easier than meeting themselves with compassion. The inner critic can be a very loud voice, hijacking the ability to connect with others, express oneself, experience joy and persist in the practice of establishing new behaviors. The most powerful solution is learning to be kind and patient with oneself. A friend of mine and an outstanding coach once told me: “Be your own defender, not your judge”. A great start into the practice of self-compassion are the books and meditations of psychologist and best-selling author Tara Brach.

To conclude, maladaptive perfectionism can become a fruitful part of our life if we are willing to face it and see it as another possibility to get closer to ourselves. Leaders who go for “good enough” will find themselves losing stress and pressure, increasing efficiency, and steadily fostering ownership in the people around them.